Why Iran Remains a Challenge for U.S. Foreign Policy 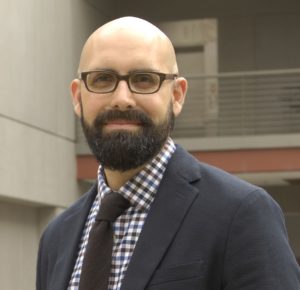 The United States and Iran have long had an adversarial relationship.  Many observers point to the U.S.’s long history of interventions into Iranian politics as the factor that has most shaped the modern relationship
between the two nations.  More recently, Iran’s expanding foothold across the Middle East has exacerbated U.S.-Iran relations. As of this writing, the most imminent threat emanates from Washington, where the Trump Administration is poised to retreat from the 2015 nuclear agreement, the Joint Comprehensive Plan of Action.

Afshon Ostovar, a popular professor of Middle East politics at the Naval Postgraduate School, will examine the dynamics of the U.S.-Iran relationship and the U.S.’s strategy to combat Iran’s regional influence and nuclear ambitions.

Dr. Ostovar is an Assistant Professor in the Department of National Security Affairs at NPS. His research and writing focus on conflict and security in the Middle East, with a special focus on Iran and the Persian Gulf. His most recent book, Vanguard of the Imam: Religion, Politics and Iran’s Revolutionary Guards (Oxford University Press, 2016) examines the rise of Iran’s most powerful armed force—the Islamic Revolutionary Guard Corps, or IRGC—and its role in power politics, regional conflicts, and political violence.

The World Affairs Council was treated to a real-life Sherlock Holmes detective story during our March luncheon. Melissa Hanham from the Middlebury Institute of International Studies at Monterey (MIIS) spoke about North Korea’s weapons of mass destruction (WMD), and particularly about the missile program designed to deliver nuclear weapons. Melissa and her colleagues at MIIS have gained an international reputation for using publicly available tools to shed light on WMD programs in various countries around the world.

When it came to tracking down the building in which North Korea houses its large missiles, Melissa’s tools included Google Earth, architectural programs, a keen eye for details in pictures published by Pyongyang, and a robust knowledge of the history of North Korea’s actions on the WMD front, all mixed together with a dash of intuition and some advice from a trucker cousin. Using photographs of the new generation of missiles as they were carried on Chinese trucks, and knowing the measurements of those trucks, Melissa was able to carefully estimate the exact length of the missile, and thus know how tall a building would need to be to house such a missile if it were raised on the back of the launch truck. Based on these calculations and some other pictures, Melissa was able to (we know now) accurately determine the architectural design of the building that houses these missiles, including the use of casters (thanks to that trucker cousin) to maximize the storage capacity for the trucks and missiles within the building.

Sure enough, when a close inspection using Google Earth revealed just such a unique building in an area known for being a closed military zone, Melissa and her team at MIIS knew they had solved the mystery. That such a tightly held state secret could be revealed by researchers using only publicly available sources is remarkable, and a true testament to the power of the information revolution.

Melissa’s actions have earned the wrath of the North Korean regime, which routinely tries to hack into her accounts and others at MIIS. Sherlock Holmes would be proud!

For more information about Ms. Hanham’s work, click here to read the research paper that she co-wrote, and click here to see a related article published on BBC News.

The World Affairs Councils of America (our umbrella organization) has a worldwide travel program.

Run by WAC of Philadelphia, the program offers a plethora of opportunities for you to travel to all the corners of the world, learn from experts, meet people who are making a difference in their communities, and see some truly amazing sights.

There are still some spaces available for trips in 2018, including to Ireland, the south of France, Botswana, and Cuba.  In addition, the 2019 schedule is up and offers some absolutely incredible tours.  Here’s just a taste: Antarctica, Hamilton’s Caribbean, southern Africa by rail, Mongolia during the Naadam Festival, Vietnam, Morocco, and a private jet tour that will take you to 14 UNESCO World Heritage Sites.

The world is waiting!  Want to learn more?  Visit the travel site at https://www.wacphila.org/travel/